In all three stages of the hydrogen value chain, there is a pressing need for digital information. In part two of this four-part series, we’ll explore the first critical piece of the changing hydrogen value chain and the impact of connected technology across the industry.

Over the next decade, it’s expected that the first large-scale hydrogen production facilities will come into operation and hydrogen will take its place in the renewable future globally. As such, there will be an increasing need for sophisticated, domain-specific accounting and data management software that can handle the complexity of production requirements. In part two of our four-part series on the hydrogen value chain, we’ll dig into the current hydrogen production methods and provide guidance on the solutions that can support this process.

Hydrogen today is produced in multiple ways at an industrial scale, which can be renewable or non-renewable. These different production sources include: 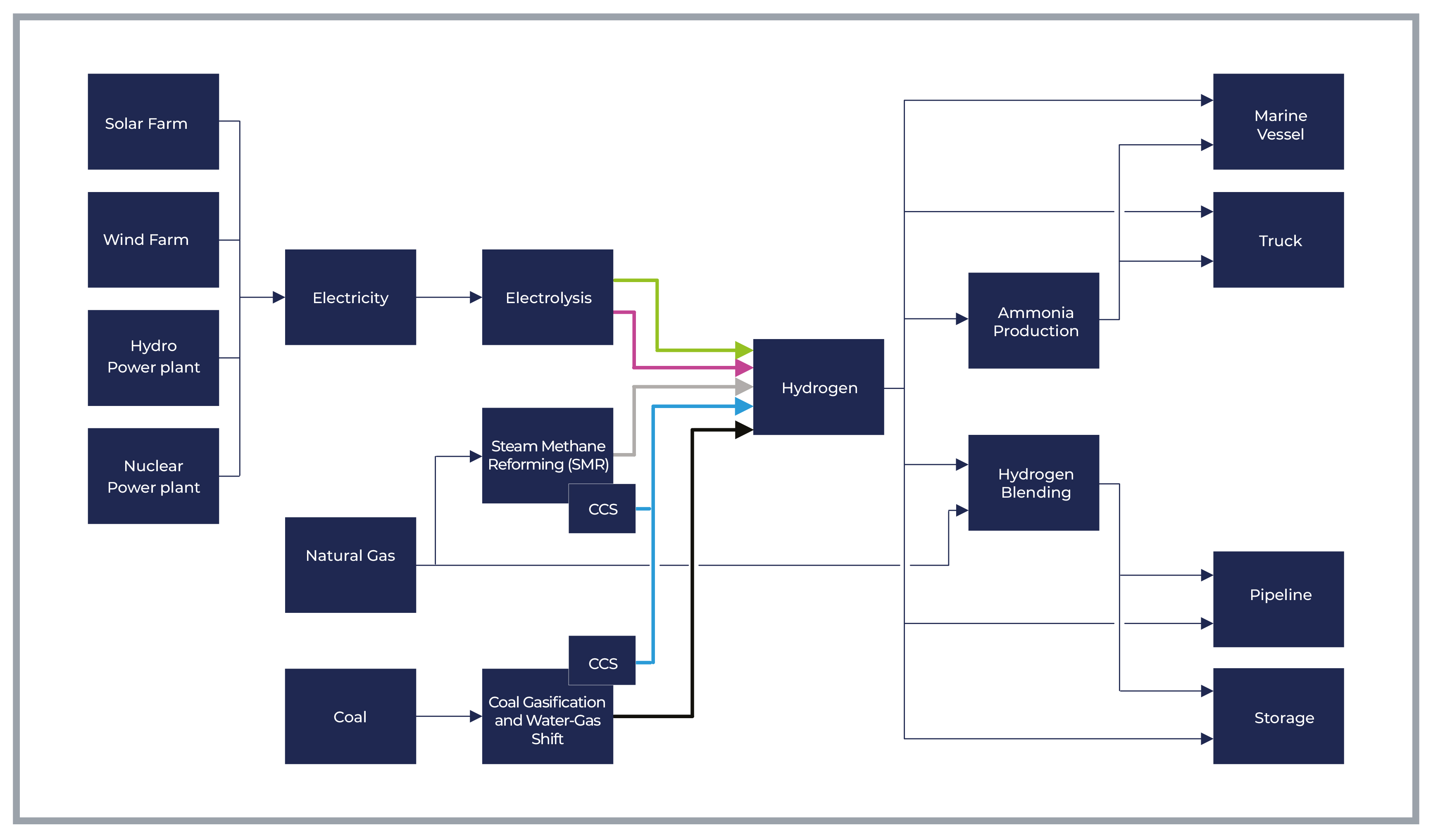 As shown in the figure above, hydrogen is primarily produced from natural gas via the Steam Methane Reforming process (SMR), where methane made from natural gas is heated to produce a mixture of hydrogen and byproducts. Unfortunately, one of those byproducts from this production model is carbon dioxide. Hence this method will never be renewable, although it is possible to implement Carbon Capture and Storage (CCS) procedures to reduce the environmental impact of SMR hydrogen production.

With the push for energy transition, a more favorable method of hydrogen production is electrolysis. In this process, demi-water is converted into hydrogen and oxygen. The electricity that powers this transformation can come from different sources, and how renewable the hydrogen is will depend on the electricity mix used.

Electrolysis has particularly impactful implications for small-scale hydrogen production. Small-scale production is a rising technology and a highly attractive option for hydrogen producers. Using this method, hydrogen can be produced using relatively small electrolysis systems, similar to the way renewable electricity is produced at offshore wind farms or solar fields.

Pilot projects of this model are currently being executed by Neptune Energy 15 in the PosHydon project, where hydrogen is produced using electricity and seawater on the offshore Q13A gas platform in the Dutch sector of the North Sea. The hydrogen is then blended with natural gas that’s also being produced on the platform, and the blend is transported to the mainland. This allows for the re-use of existing offshore assets while reducing the need for electricity transport capacity by connecting offshore wind turbines directly to the platform.

In the Netherlands, the hydrogen consortium NortH2 recently partnered with industrial hydrogen user OCI to create the first integrated green ammonia- and methanol value chain in their Dutch plants. As pioneers in their space, these large industrial users of hydrogen are creating a favorable economic climate for future hydrogen producers to invest in larger hydrogen plants and secure increased demand for hydrogen energy.

Depending on how the hydrogen is produced, the accounting and data management requirements will be different. “One of the key strengths of EC Production is its agnostic approach to business processes in the energy value chain, which allows handling a broad range of energy carriers, raw materials, and by-products. As new production technologies like electrolysis continue to move the hydrogen industry toward a more sustainable future, Energy Components can pave the way for a smooth and collaborative transition,” explains Magnus Ulseth, Director of LNG & Midstream Products at Quorum Software.

For instance, production efficiency monitoring and optimization are particularly critical in hydrogen produced by electrolysis, as this method is often associated with significant losses. Regardless of the production method, there are also many aspects they share in common. Requirements will originate from the internal need to steer and optimize the production process, handle sales and revenue-related processes, and from external requirements such as regulatory and compliance requirements.

Within the energy industry, and hydrogen production systems, there is a clear agenda and a variety of initiatives to increase the value derived from data. To best extract its value, data needs to be processed in a system designed specifically for the energy industry, such as Energy Components.

Stay tuned! Over the coming weeks, we’ll be diving deeper into the next two stages of the hydrogen value chain: transportation and storage. In the meantime, read our white paper that explores how Energy Components software supports energy business operators in a future global hydrogen economy.